Gold Bull Resources Corp. (TSX-V: GBRC) (“Gold Bull” or the “Company”) is pleased to announce the commencement of a Geophysical Survey known as a Controlled Source Audio Magnetotellurics (CSAMT) within its 100% owned Sandman Project (“Sandman” or the “Project”) located in Humboldt County, Nevada, USA.

Areas prospective for gold within the Sandman project are extensively covered by wind-blown sand, concealing the geological indicators of mineralizing processes we might otherwise observe at surface.  We are drawing on the management team’s experience applying surface geochemistry and geophysics to covered terrains in Australia and Africa.  Orientation lag geochemical sampling over the Silica Ridge deposit provided encouragement that the technique can work in this setting, and analysis of the drill hole geochemical data from the Sandman deposits aids our understanding of pathfinder element associations.  CSAMT is a proven geophysical technique in epithermal gold exploration, particularly in Nevada.  We are integrating these new datasets with existing geological mapping, drilling, ground and airborne geophysical surveys, using our understanding of epithermal mineral systems and orientation over known deposits at Sandman.  Our current exploration model, discussed in the recent press release, is focused on the search for a world-class gold orebody.

Controlled Source Audio Magnetotelluric (CSAMT) surveying is an electromagnetic technique utilizing naturally occurring EM waves propagating in the waveguide formed by the magnetosphere and the Earth’s surface.  The EM waves are induced by regional and global lightning strikes and the interaction of the solar wind with the Earth’s magnetosphere.  Scattering of the EM waves by structures within the Earth produce perturbations in the time-varying electric and magnetic fields measured at surface, which can be numerically processed to yield images of those structures, which are in turn interpreted to determine the locations of faults that may have acted as conduits for mineralizing hydrothermal fluids.  For instance, the interface between the Triassic metasedimentary basement rocks and the overlying Tertiary volcanic and volcaniclastic sequence is the locus of a strong contrast in electrical resistivity, which is readily imaged using CSAMT.  Faults offsetting the Triassic-Tertiary contact are potential sites for gold mineralization.  Also, adularia alteration of the Tertiary rocks, often associated with gold mineralization, imparts high electrical resistivity, contrasting strongly with the argillic and propylitic altered, more electrically conductive country rocks.  Historic CSAMT data collected over the known deposits at Sandman provides useful orientation information on this geophysical technique.

Targets identified by interpreting the CSAMT geophysical data in conjunction with “lag” geochemical sampling data will be tested as part of the drilling programme planned for this winter. 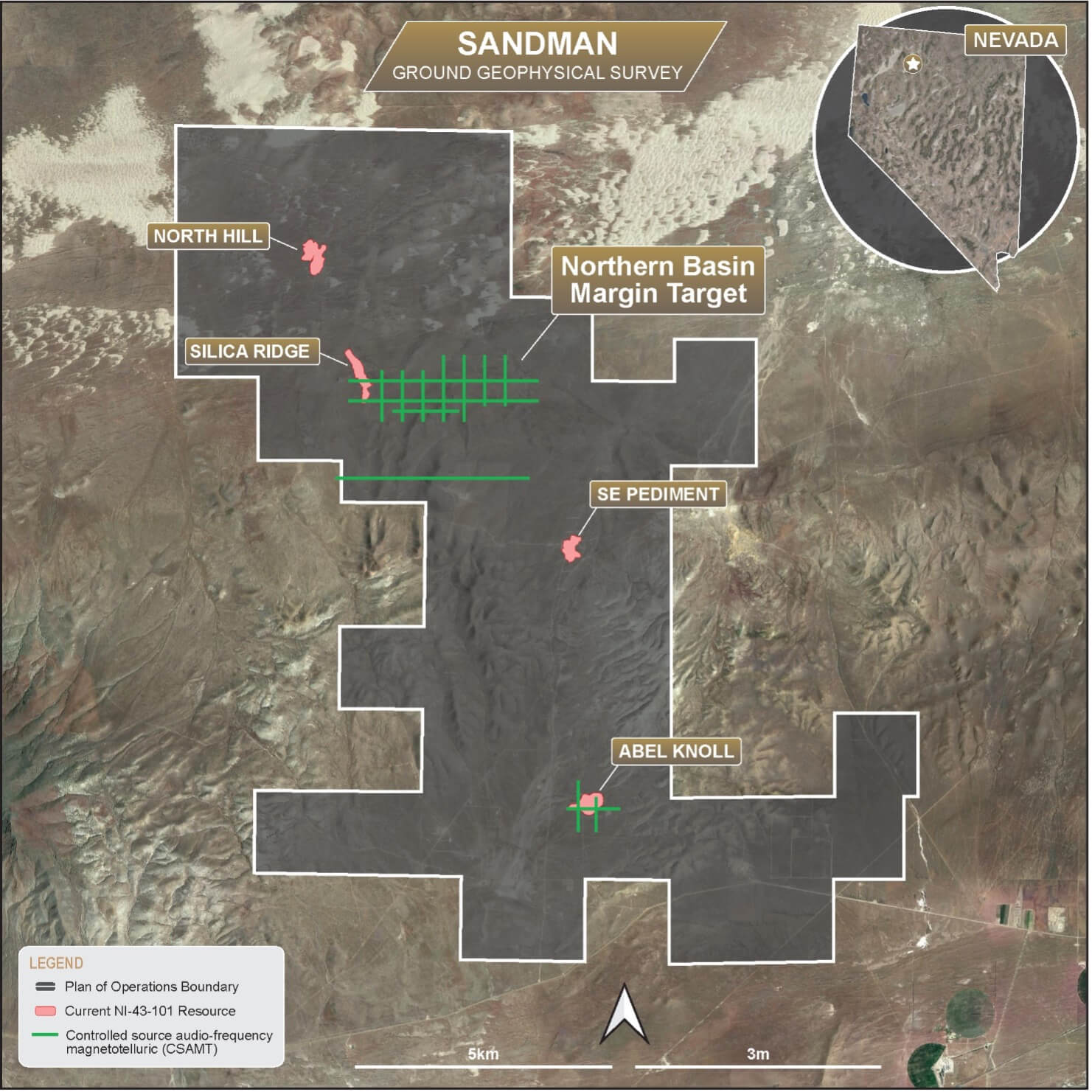 In December 2020, Gold Bull purchased the Sandman Project from Newmont. Gold mineralization was first discovered at Sandman in 1987 by Kennecott and the project has been intermittently explored since then. There are four known pit constrained gold resources located within the Sandman Project, consisting of 21.8Mt @ 0.7g/t gold for 494,000 ounces of gold; comprising of an Indicated Resource of 18,550kt @ 0.73g/t gold for 433kozs of gold plus an Inferred Resource of 3,246kt @ 0.58g/t gold for 61kozs of gold. Several of the resources remain open in multiple directions and the bulk of the historical drilling has been conducted to a depth of less than 100m. Sandman is conveniently located circa 25-30 km northwest of the mining town of Winnemucca, Nevada.

Cherie Leeden, B.Sc Applied Geology (Honours), MAIG, a “Qualified Person” as defined by National Instrument 43-101, has read and approved all technical and scientific information contained in this news release. Ms. Leeden is the Company’s Chief Executive Officer. Cherie Leeden relied on resource information contained within the Technical Report on the Sandman Gold Project, prepared by Steven Olsen, a Qualified Person under NI 43-101, who is a Qualified Persons as defined by the National Instrument NI 43-101. Mr Olsen is an independent consultant and has no affiliations with Gold Bull except that of an independent consultant/client relationship.  Mr Olsen is a member of the Australian Institute of Geoscientists (AIG) and is the Qualified Person under NI 43-101, Standards of Disclosure for Mineral Projects.

Gold Bull’s mission is to grow into a US focused mid-tier gold development Company via rapidly discovering and acquiring additional ounces. The company’s exploration hub is based in Nevada, USA, a top-tier mineral district that contains significant historical production, existing mining infrastructure and an established mining culture. Gold Bull is led by a Board and Management team with a track record of exploration and acquisition success.

Gold Bull’s core asset is the Sandman Project, located in Nevada which has a 494,000 oz gold resource as per 2021 43-101 Resource Estimate. Sandman is located 23 km south of the Sleeper Mine and boasts excellent large-scale exploration potential. Drilling at Sandman is currently underway.

Gold Bull is driven by its core values and purpose which includes a commitment to safety, communication & transparency, environmental responsibility, community, and integrity.

This news release contains certain statements that may be deemed “forward-looking statements” with respect to the Company within the meaning of applicable securities laws. Forward-looking statements are statements that are not historical facts and are generally, but not always, identified by the words “expects”, “plans”, “anticipates”, “believes”, “intends”, “estimates”, “projects”, “potential”, “indicates”, “opportunity”, “possible” and similar expressions, or that events or conditions “will”, “would”, “may”, “could” or “should” occur. Although Gold Bull believes the expectations expressed in such forward-looking statements are based on reasonable assumptions, such statements are not guarantees of future performance, are subject to risks and uncertainties, and actual results or realities may differ materially from those in the forward-looking statements. Such material risks and uncertainties include, but are not limited to, the Company’s ability to raise sufficient capital to fund its obligations under its property agreements going forward, to maintain its mineral tenures and concessions in good standing, to explore and develop its projects, to repay its debt and for general working capital purposes; changes in economic conditions or financial markets; the inherent hazards associates with mineral exploration and mining operations, future prices of copper and other metals, changes in general economic conditions, accuracy of mineral resource and reserve estimates, the potential for new discoveries, the ability of the Company to obtain the necessary permits and consents required to explore, drill and develop the projects and if obtained, to obtain such permits and consents in a timely fashion relative to the Company’s plans and business objectives for the projects; the general ability of the Company to monetize its mineral resources; and changes in environmental and other laws or regulations that could have an impact on the Company’s operations, compliance with environmental laws and regulations, dependence on key management personnel and general competition in the mining industry. Forward-looking statements are based on the reasonable beliefs, estimates and opinions of the Company’s management on the date the statements are made. Except as required by law, the Company undertakes no obligation to update these forward-looking statements in the event that management’s beliefs, estimates or opinions, or other factors, should change.

Stay up to date with all things Gold Bull Resources including news release updates and upcoming events.

Stay up to date with all things Gold Bull Resources including news release updates and upcoming events.